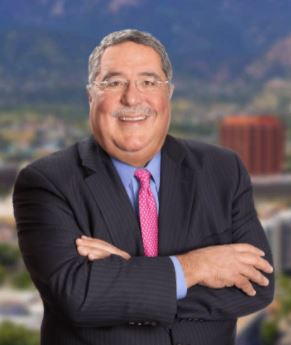 Franklin D. Azar founded Franklin D. Azar & Associates, P.C. in 1987 with the goal of effectively representing clients by ensuring that they receive full and fair compensation for their injuries, regardless of the cause. Over the years Mr. Azar has built the firm into the largest plaintiff-centered personal injury firm in Colorado with offices in Denver, Denver Tech Center, Colorado Springs, Pueblo, and Trinidad. President and owner of Franklin D. Azar & Associates, P.C., Mr. Azar has earned widespread recognition as one Colorado’s top plaintiff’s attorneys.

Mr. Azar is actively involved in cases across the country concerning wage and hour violations, insurance bad faith, products liability, and various mass torts concerning pharmaceutical drugs and medical devices. Given his expertise in effectively representing injured clients, Mr. Azar was appointed to the Plaintiffs’ Steering Committee in the Multi-District litigation involving DePuy’s faulty Pinnacle hips. Additionally, Mr. Azar helps to curb corporate corruption by actively assisting whistleblowers with enforcement of the Foreign Corrupt Practices Act. In 2013, Mr. Azar tried and won one of the largest individual cases against a football helmet manufacturer in U.S. history in Trinidad, Colorado—securing an $11.5 million verdict with $3.1 million of the verdict against Riddell, the primary provider of helmets to the National Football League.

In 1995, Mr. Azar brought the first of 26 state class actions against Wal-Mart in Trinidad, Colorado, resulting in jury verdicts of $172 million in Oakland, California in 2005 and $78 million (subsequently increased to $188 million to include damages, interest, and attorneys’ fees) in Philadelphia, Pennsylvania in 2006. Mr. Azar’s dedication to Wal-Mart’s employees’ rights resulted in over three-quarters of a billion dollars in settlements and forever changed how Wal-Mart paid its employees for overtime and missed rest and meal breaks.

Mr. Azar has been involved in pursuing the makers of Reglan, Yaz, Vioxx, Fen-Phen, Lotronex, Rezulin, Propulsid, Breast Implants, Baycol, and PPA. His firm has handled over 5600 PPA cases in the state of California and that were in the State MDL. Mr. Azar has successfully litigated numerous defective product cases involving Ford’s Bronco II and Bridgestone/Firestone tires.

Formerly, Mr. Azar was an Assistant District Attorney for the Third Judicial District and the youngest attorney ever appointed to the position. Mr. Azar has devoted his legal career to the representation of the under-represented and has represented clients from all 50 states. He has been named as class counsel in over 20 separate employment class actions and handled thousands of mass tort cases.