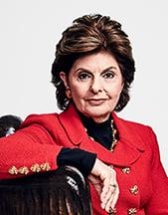 "I start every day with the knowledge that helping people and fighting for justice is my duty, and that nothing worthwhile comes without sacrifice, self-discipline, and courage."

-- Gloria Allred, Fight Back and Win

Ms. Allred is a founding partner of the law firm of Allred, Maroko & Goldberg (AM&G). Her firm handles more women's rights cases than any other private firm in the nation and has won hundreds of millions of dollars for victims. Ms. Allred also founded and is currently serving as President of the Women's Equal Rights Legal Defense and Education Fund (WERLDEF).

Allred, Maroko & Goldberg represents victims who have been discriminated against on account of their sex, race, age, physical handicap or sexual orientation. Her firm also represents victims of AIDS discrimination, sexual harassment and wrongful termination. AM&G is also well-known for its work on behalf of victims in civil rights, rape, child sexual abuse and battered women cases.

Over the course of her 40 year legal career, Gloria Allred has won countless honors for her pioneering legal work on behalf of women's rights and rights for minorities.

Ms. Allred has won the President's award from the National Association of Women Lawyers and the President's Award for Outstanding Volunteerism, presented to her in 1986 by President Ronald Reagan at the White House. She has been voted by her peers as one of the best lawyers in America. In January 2014 Gloria received the Lifetime Achievement Award from The National Trial Lawyers for her trailblazing and pioneering role in combating injustices and winning new rights especially for women and minorities.

Gloria Allred is also a three-time Emmy nominee for her commentaries on KABC television in Los Angeles. Her nationally syndicated television show "We the People, with Gloria Allred" was also nominated in 2012 for a Daytime Emmy Award.

Ms. Allred was also selected as one of the most important radio talk show hosts in America by USA Today, and in May, 2001 she received the Judy Jarvis Memorial Award from the National Association of Radio Talk Show Hosts for her outstanding contributions to talk radio.

Articles by her or about her have appeared in publications such as TIME Magazine, The New York Times, Ms. Magazine, The American Lawyer, The Daily News, The Wall Street Journal, The Los Angeles Times, The Herald Examiner and The London Times. In July 1990, Los Angeles Magazine named her "One of the 30 Most Powerful People in Los Angeles" and in 1994, "One of the 50 Most Interesting People in Los Angeles." TIME Magazine called her "one of the nation's most effective advocates of family rights and feminist causes." In 1986 she received a commendation from the Los Angeles County Board of Supervisors for her "exceptional record of achievement" and a commendation from Los Angeles Mayor Tom Bradley "for her many outstanding contributions to the justice system."

Ms. Allred is also the only individual in the nation to win the 1986 Public Service Award from the National Association of Federal Investigators.

In 2006 Ms. Allred was honored by her high school as a "Distinguished Daughter" of the Philadelphia High School for Girls, an honor that she received at a ceremony in Philadelphia. Also, in 2007 she was presented the "Silver Achievement Award" by the YWCA of Greater Los Angeles, for "distinguishing herself in the community through professional, volunteer and/or philanthropic work resulting in significant change". In addition, in 2009, she was selected by New York University to receive its Distinguished Alumnus Award, which she accepted at their commencement in May 2009.

Ms. Allred was elected for inclusion in Southern California SuperLawyers listings from 2004 to 2018 by Law and Media and Los Angeles Magazine and she has been selected for inclusion in the 2011-2017 editions of "Best Lawyers in America". In September 2013 she received the Victoria Woodhull Award from the Veteran Feminists of America for her dedicated efforts as a champion of women's civil rights. . In 2014 she received the Face Forward Award for her legal support of victims of domestic violence and Loyola Law School named Gloria one of their top 50 most Inspirational Alumni. In 2015 Ms. Allred was honored with the inaugural Elgy Award for her decade's long commitment to secure equality for the LGBT community and most recently Gloria was honored at the 2016 International Women's Forum (IWF) World Leadership Conference with the 2016 IWF Women Who Make a Difference Award.

In 2017 Netflix announced "Seeing Allred" an original documentary about Ms. Allred and her battles for justice which will launch globally on Netflix in February 2018 after its world premiere in the U.S. Documentary Competition at the 2018 Sundance Film Festival. In February 2018 Ms. Allred will receive the Lenore Kramer Award for Excellence from the Women's Caucus of the New York State Trial Lawyers Association. In June 2018 she was given a Lifetime Achievement Award by the National Association for Women (NOW) for her enduring commitment to fighting injustices against women.

In addition to being an attorney, Ms. Allred holds California life credentials in secondary school education and supervision. She taught in public schools for 6 1/2 years and was also a lecturer at the University of Southern California for several years.

Ms. Allred is also the author of "Fight Back and Win, My Thirty-Year Fight Against Injustice- And How You Can Win Your Own Battles".

Recently President Obama introduced Ms. Allred as "one of the best attorneys in the country".

District of Columbia Court of Appeals, 2013